Beats and Breath/Jackson Allers talked to legendary German graffiti writer and publisher Don Karl aka STONE, fresh off the release of his newly published book Arabic Graffiti authored by Lebanese typographer Pascal Zoghbi, with essays from a host of calligraphers, graffiti artists, designers, photographers and academics. 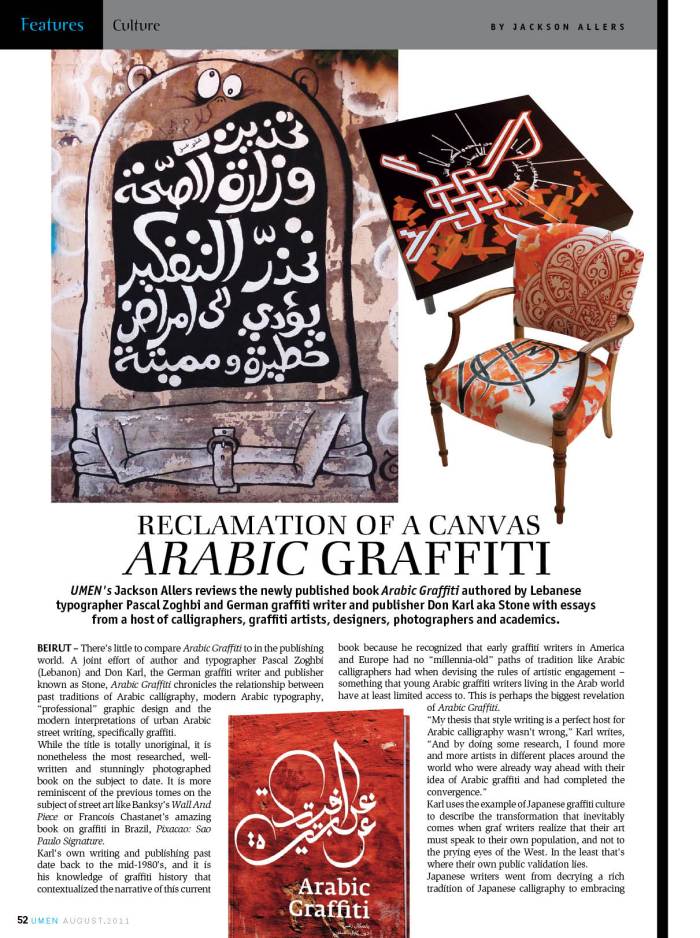 Original Print version of this article

While the title is totally unoriginal, it is nonetheless the most researched, well- written, and stunningly photographed book on the subject to date. It is more reminiscent of the previous tomes on the subject of street art like Banksy’s Wall and Piece or Francois Chastanet’s amazing book on graffiti in Brazil – Pixacao: Sao Paulo Signature.

Saleh’s book is “a visual reading of the city of Beirut through the stencils on her walls, an outsider’s view of an internal struggle.” Like Arabic Graffiti it also takes a somewhat academic approach, but also includes an interactive element – with 8 sheets of stencils which readers can practice with. Chemaly’s book is, however, more of an internal reflection on the bandito nature of street art that has only in the last decade taken on some acceptance in the more storied art circles – arguably even less considered in the rarified world of art in Lebanon and the Middle-East. Still Chemaly’s book is thorough.

Other predecessors to Arabic Graffiti like Beirut Street Art by the Art Lounge, and Rhea Karam’s Breathing Walls are specific to Lebanon’s street art scene as well, but both of these books feel extremely rushed in their output, and are but ripples in a pond next to Arabic Graffiti.

According to Zoghbi, “The aim of the book is to document the Arabic graffiti scene and to help develop a stronger connection with the local artists, as well as an awareness of the Arabic calligraphic side of the art, which will lead to a mature Oriental graffiti scene.

In this statement is the implication that young graffiti writers in the Arab world have yet to fully embrace their roots and the traditions that will come to determine the future aesthetic of the burgeoning Arabic graffiti scene. It’s an accurate assessment that in some ways mimics the evolution of the Arabic hip-hop scene that has also developed from the English and French-laced rhymes of Arabic rappers in the mid-1990s to the rhymes of the current Arab rap scene which are predominantly in Arabic. 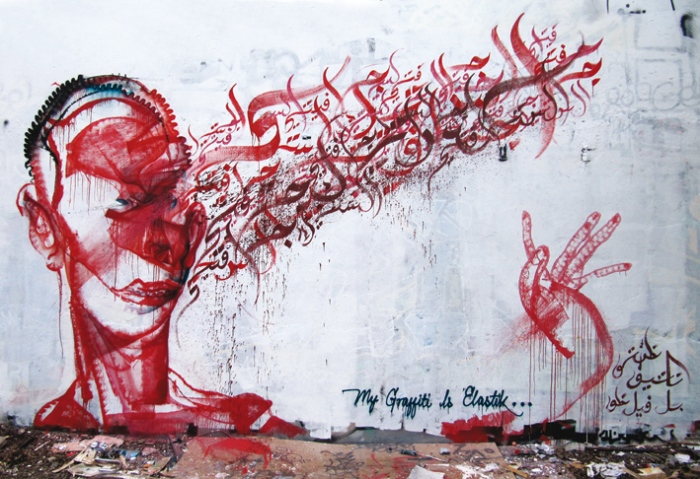 Of course, it is the sensibilities of Karl that really tie this book together. Having conducted a graffiti workshop called “Bombing Beirut” in 2008, Karl met with Zoghbi and most of the Lebanese graff scene, planting the seeds to what ultimately fomented into Arabic Graffiti.

Karl’s own writing and publishing past date back to the mid 1980’s, and it his knowledge of graffiti history that contextualized the narrative of this current book because he recognized that early graffiti writers in America and Europe had no “millennia-old” paths of tradition like Arabic calligraphers had when devising the rules of artistic engagement – something that young Arabic graffiti writers living in the Arab world have at least limited access to. This is perhaps the biggest revelation of Arabic Graffiti.

“My thesis that style writing is a perfect host for Arabic calligraphy wasn’t wrong,” Karl writes, “And by doing some research, I found more and more artists in different places around the world who were already way ahead with their idea of Arabic graffiti and had completed the convergence.”

Karl uses the example of Japanese graffiti culture to describe the transformation that inevitably comes when graf writers realize that their art must speak to their own population, and not to the prying eyes of the West. In the least that’s where their own public validation lies.

Japanese writers went from decrying a rich tradition of Japanese calligraphy to embracing it as an inspiration. “Calligraphy? That’s for old men!” came the refrain from early Japanese bombers. But as Karl writes in the preface, “Today, less than twenty years later (from meeting them), they have been proven wrong. Japan is rich with beautiful graffiti writings and large scale murals that make elaborate use of the Japanese script.”

Keeping these ancient forms of writing in mind, both in the Arab world and elsewhere, it is fitting that Arabic Graffiti’s opening chapter is titled Arabic Script & Calligraphy. It covers ground from the basic Arabic alphabet to a questionable explanation of the visual aspect of the Arabic script being originally conceived to represent the holy scriptures of the Koran (Huda Smithshuijzen AbiFares) to the connection of Arabic calligraphy and graffiti as being “two daughters of the same parents” – an interpretation written by the Iraqi calligrapher Hassan Massoudy who painted a mural with the French graffiti writer Marko 93.

“I discovered the fluidity of the spray can, which suddenly allowed me to do a continuous gesture of five meters before stopping a stroke,” Massoudy writes.

The second chapter, Public Art and Graffiti in the Middle-East, moves from the calligraphic messages in Bahrain, experiencing some of the Arab world’s most ruthless repression at the moment, to the calligraphic writing on shop signs in the Arab world, a section written by Zoghbi, to the ever-present and highly ubiquitous tradition of calligraphy on the bodies of trucks.

As anthropologue and photographer Houda Kassatly writes, the messages serve “aesthetic and decorative, practical and cultural purposes”, as well as assertions of identity.

“You want to see the stars in broad daylight? Follow me.”

“May God damage those who damage.”

“She is a beautiful coquette and arrogant.”

The second chapter moves on to more resistance oriented forms of graffiti in the Palestinian territories. Zoghbi and Karl point to the use of classic symbolism – the Al Alqsa Mosque in Jerusalem and the Al Kaaba in Mecca – as the earliest forms of street throw-ups. Stencils of religious writings, and the well-known cartoon figure of Hanzala created by the Palestinian cartoonist Naji Al Ali, are lauded as rich indicators of the street art traditions in Palestine that Zoghbi and Karl contend are not inspired by Western graffiti. “We can say that the Palestinian graffiti is a true Arabic urban art intervention.”

Of course this chapter moves effortlessly into forms of street art as resistance and the influence played by outsiders, like Swoon, Banksy, Askar, Blu, and literally dozens of other artists who all had their hands in marking up The Wall that weaves in and out of some 770 kilometers of Palestinian territory. 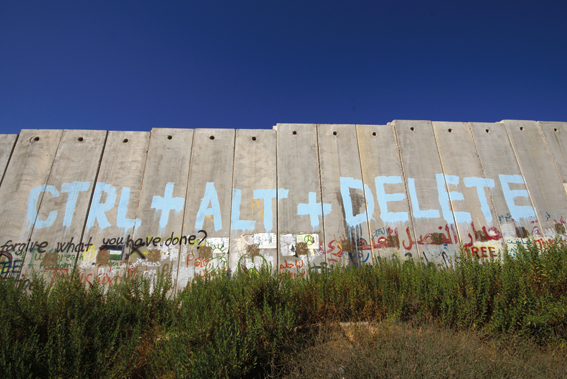 William Parry, a London-based freelance journalist and photographer for The Guardian that published the book Against the Wall: the Art of Resistance in Palestine about the the protest art on on the West Bank Barrier, concludes in the end that even if local Palestinians misunderstand the purpose of the art on the wall, graffiti writers have never done things to necessarily please people – resigning themselves to artistic forms of dissent as a way of providing their commentary on the world.

The book of course moves on to other places in the Arab world like Lebanon. Saudi academic Saleh writes about the manifestations of street art that emerged as a result of the devastating 1975-1990 Civil War – street art traditions whose influence is felt strongly today. Political stencil art, calligraphic slogans, etc. are “technical and artistic,” theorizing that the “difference between street art and the stencil graffiti in Beirut is that street art is not divided, it is patriotic, localized, colloquial and most importantly found and drawn in Arabic letterforms and typography, something very specific in Lebanon.”

Graffiti in Lebanon, however, was a mark of territory during the Civil War, as it has been in many places around the world that experience forms of urban destruction, dilapidation, neglect and or encroachment from outsiders. According to Saleh, “Beirut’s graffiti (during the Civil War) told the story of division, war and social struggles; it spoke of history in a way that Lebanon’s history books could not.”

In the post-war period in Lebanon, Zoghbi contends graffiti “voiced the pain of people,” and in the late 90s, as the political street writing was going unnoticed new forms of graffiti emerged, in large part because of the underground hip-hop movement that was taking root in Lebanon (and the Arab world).

Their mediums were the multitude of “hidden walls and and surfaces in old, neglected houses or factories and empty parking lots…that were the practice grounds for experimentation” writes Zoghbi in the section Beirut’s Graffiti Writing & Street Art. With notions of private property and public property being vastly different in post-Civil War Lebanon when compared to the West, Arabic Graffiti correctly illustrates that graffiti writers managed to avoid the stigmas as criminals, vandals and misfits assigned to graffiti writers in the West.

But most of the graffiti featured during this initial period were pieces done in latin letters. It wasn’t until the 2006 Summer war with Israel that the first signs of Arabic graffiti began to show up on the walls of Beirut. “Beirut was empty, gray and desperate,” writes filmmaker and graffiti artist, Siska, in the section Beirut Never Dies.

A member of the old-school Lebanese hip-hop crew Keta3 Beirut and original graffiti crew member of the REK (Red Eyed Kamikazes) crew- the first generation of Lebanese graffiti writers- his collaborations with French graffiti artist Prime of the TG crew were the first pieces in Lebanon to be done in stylized Arabic lettering, with messages that centered around the word “Beirut.”

From the book Arabic Graffiti

“Beyrout Ma Btmoot (Beirut Never Dies),” and “Beyrout in Hakat (if Beirut Could Speak),” which is lifted from Said Akl’s book title If Beirut Could Speak, became brave new entries into the pantheon of Arabic artistic and cultural expression, using a basic Arabic typography to transmit these messages. Zoghbi and Karl are clear to their writers that this is a message they want to convey.

Siska writes, “I wanted to find the font of our city and carefully place the messages in the right spots around the city, which has suffered a long history of being marked by different groups and interests.”

The idea of finding a font to suit the possibilities of Arabic graffiti are aptly suggested with chapters about amazing artists working outside of the Arab world. Writers such as Paris-born el Seed and Hest 1, and Zepha, also born in France, who typify the potential of Arabic graffiti and it’s relation to past forms of Arabic calligraphy – styles that have yet to take such elaborate shape and form with any significant proliferation within the Arab-speaking countries.

That is not to say it is NOT happening through efforts like the Blouzaat collective of Ahmad Sabbagh, a Jordanian graphic designer and typographer, German street artist and graphic designer Michael Schinkothe, and German graffiti writer from the Maclaim graffiti and Herakut crews.

The book finishes with Zoghbi showcasing his own art and use of typography alongside other artist interpretations of Arabic calligraphy, and these are truly impressive uses of Arabic script with modern urban styles. In the end, Arabic Graffiti manages to effectively convey the idea that there is an implied voice and aesthetic that Arab graffiti writers and street artists need to engage in that will draw on the storied traditions of the past in order to reinvent occidental influences and make the act of graffiti something fresh.

For Arab graffiti writers, this is a must have item for their bookshelves.

Page 2 from the Printed Article

Nomadic Wax is a U.S. based social enterprise that produces music, film and educational events aimed at creating cross-cultural exchange and increasing awareness of global issues.